Hamlin, who also won the pole for Friday night’s Xfinity Series race, covered BMS’ half-mile bullring with a record time of 14.602 seconds at a speed of 131.407 mph.

It was Hamlin’s second pole of the season, his third at Bristol, his 22nd career Sprint Cup pole and Toyota’s fifth in the last six Cup races.

It was also Joe Gibbs Racing’s eighth pole of 2015, twice as much as any other team. It also marked the second consecutive week and second time in team history that JGR drivers have qualified 1-2-3; the first time was last week at Michigan

“I had a little bit left in the tank, for sure,” Hamlin said. “But the last round is the one that pays usually.

“It was just a great day. Our cars had speed in it all day and I got the car working the way I needed to in the final practice. … Bristol has been a great track for me in the past. We’ve got nothing to lose. We’re just gearing up for the Chase, so I think our FedEx team is ready. ”

“Everybody’s just been working their tails off and doing a great job,” Busch said. “It’s a JGR front top-three there, and Kenseth has won two of the last four here, so we’re definitely no slouches here at Bristol.”

Kenseth, who qualified 13th, won the spring race at Bristol and looks for the season sweep Saturday night.

Kurt Busch, Kyle Busch and Jeff Gordon are the winningest active drivers at Bristol with five wins each. 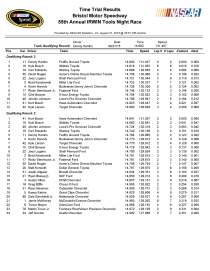 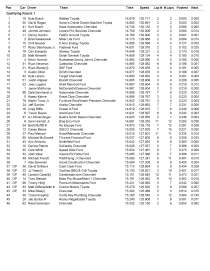