With three races remaining to qualify for the Chase for the Sprint Cup, much of the 16-driver field is already locked in.

But there’s still one significant battle that resembles a game of musical chairs: three drivers duking it out for the 16th and final Chase spot.

Right now, Clint Bowyer has the edge, holding down the final spot on the Chase grid, according to a CNBC study after this past Sunday’s Sprint Cup race at Michigan.

But Aric Almirola (23 points behind) and Kasey Kahne (26 points back) haven’t given up hope that they can overtake Bowyer for the final spot.

According to CNBC’s Eric Chemi, winless drivers Jamie McMurray, Paul Menard, Ryan Newman and Jeff Gordon are all likely to make the Chase despite not having visited Victory Lane thus far in 2015.

But also winless are Bowyer, Almirola and Kahne.

“Right now Bowyer is still hanging on to his spot, with a sizable cushion,” Chemi writes. “Our model still has him as the favorite to get the sixteenth Chase spot – 71 percent chance.

“Kahne has a 15 percent chance to make it back in. He’ll basically need to do it with a win, because he’s too far back on points to expect that to be a real strategy. Among the next three tracks, Kahne has won at two of them: Bristol and Richmond. Last year he got a late regular season win, at Atlanta – the second-to-last race before the Chase started.”

Both Kahne and Almirola won races last season. Bowyer, on the other hand, has not visited a Sprint Cup Victory Lane since 2012.

And because of that, Chemi adds, “(Bowyer) might be better focused on accumulating points and hoping nobody else new wins a race.”

But don’t forget Bowyer appeared to be fairly comfortable into the Chase last year, only to be eliminated in the final Chase qualifying race at Richmond.

Check out the chart compiled by Chemi and Andrew Maness of PitRho, a racing data and analytics firm, which have created a computer model that simulates the season 100,000 times based on each driver’s performance in 2015 and the previous two seasons: 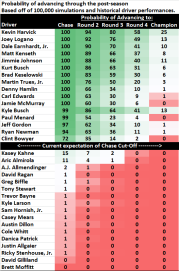 Sign up at nbcsports.com/gridchallenge for your chance to win $16 million by selecting a perfect Chasebracket, but if you miss out on the grand prize, you’ll still have a chance to win the weekly playoff grid challenge.