Matt Crafton led the race going into the final restart and was in position to take the points lead from Reddick, but Crafton was shuffled back and finished seventh. Reddick placed eighth. Crafton gained two points – one for placing a position better than Reddick and one for leading at least a lap – to close to within six points of Reddick. Erik Jones is third in the standings, seven points behind Reddick. 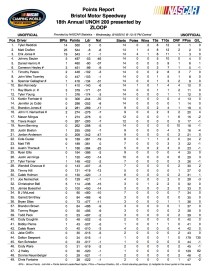