Michael Waltrip Racing will cease to field full-time entries in the Sprint Cup Series next season.

The team announced the news Wednesday morning and said driver Clint Bowyer would be free to pursue other opportunities after the season. MWR still will field the No. 15 Toyota of Bowyer and the No. 55 of David Ragan through the last 13 races this year.

“MWR will race hard and compete for the remainder of the 2015 season,” MWR co-owner Rob Kauffman said in a release from the team. “This decision was made after weighing several different options and scenarios.

“I felt it was important to make an announcement as soon as we had clarity, so that is what we are doing today. I want to thank all of our staff, partners, sponsors and fans for all their effort and support over the years.

“Clint Bowyer has done a lot for MWR since joining us in 2012, and we appreciate the energy and effort he has given the organization. After many discussions, Clint and I agreed we would go our separate ways at the end of the season, and I wish him well in whatever direction he pursues.”

Kauffman announced July 30 that he had agreed to purchase an interest in Chip Ganassi Racing with Felix Sabates. Two days later at Pocono Raceway, he said he planned to “integrate” the organization with Ganassi.

The Sports Business Daily initially reported that Kauffman would bring Bowyer and sponsor 5-hour Energy to Ganassi’s team, expanding to a third car. But Ganassi employees were told Wednesday morning the organization wouldn’t add another car. 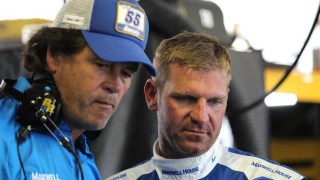 Bowyer, who had joined MWR from Richard Childress Racing in 2012, also delivered a brief statement at Pocono, saying he intended to focus on making the Chase for the Sprint Cup. With three races remaining in the regular season, he is in the final cutoff spot for qualifying for the 10-race playoff on points.

“I want to thank Michael, Rob and everyone at Michael Waltrip Racing that made these past four years special,” Bowyer said in the team’s release Wednesday. “After extensive discussions with Rob and MWR, we came to the point that we mutually agreed our paths in the future just didn’t align, but I think we all agreed on the next steps in a very professional manner.

“I am looking forward to what future opportunities may come but for now we have a championship to pursue in 2015, and we owe it to every one of our sponsors, partners, employees and fans to deliver on and off the track.”

Michael Waltrip Racing entered the Sprint Cup Series full time in 2007 as one of the flagship teams for Toyota’s first foray into NASCAR’s premier circuit.

The team endured a rocky start when an illegal fuel additive found in Waltrip’s car in qualifying for the season-opening Daytona 500 resulted in a heavy points penalty, fines and a crew chief suspension. Waltrip failed to qualify for 19 races in 2007, and the team lost major sponsors in Domino’s and Burger King. Its finances were stabilized by the arrival of Kauffman, a billionaire hedge fund investor who bought into the organization in the fall of ’07.

MWR made incremental strides toward success, qualifying Bowyer and Martin Truex Jr for the Chase in ’12 and finishing runner-up in points. But things began unraveling again the next season when a team orders scandal in the regular season-finale at Richmond International Raceway resulted in Truex being booted from the Chase by NASCAR. His sponsor, NAPA, withdrew its sponsorship after the season, and MWR contracted from three to two cars.

The team hasn’t won since Bowyer’s victory at Charlotte Motor Speedway in October 2012.

“Rob joined MWR in 2007 and has helped give us the resources to build a competitive race team, and in 2012, Clint Bowyer took us to the doorstep of a championship,” Waltrip said in the release. “From where MWR started behind my house in Sherrill’s Ford (N.C.) to winning Sprint Cup races, poles and earning Chase berths, I am proud of what we accomplished.

“My family has been a part of NASCAR for almost five decades, and I plan on being a part of it for years to come. I would not have had the opportunity to start this journey without so many great partners, sponsors and employees, and I want to thank each of them for making Michael Waltrip Racing a reality.”