Kyle Busch strengthened his hold on a top-30 ranking that would qualify him for the Chase for the Sprint Cup, and Clint Bowyer lost more than half his cushion on the cutoff line for the playoffs.

Busch finished 11th in Sunday’s Pure Michigan 400, improving a spot to 29th in the points standings. With three races remaining in the regular season, Busch has a 23-point lead on 31st-ranked Cole Whitt. With four wins, Busch will qualify for the Chase as long as he remains in the top 30 in points (after missing the first 11 races with injuries).

The outlook is much cloudier for Bowyer, who finished 41st at Michigan International Speedway after a midrace wreck. Bowyer is ranked last among the five nonwinless drivers occupying provisional Chase berths. He is 23 points ahead of Aric Almirola after entering Michigan with a 50-point margin.

With a runner-up finish, Kevin Harvick maintained his 48-point lead over Joey Logano in the standings, which will be reset after the Sept. 12 race at Richmond International Raceway. 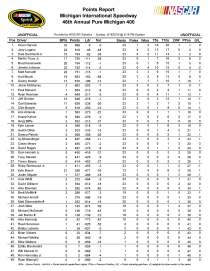 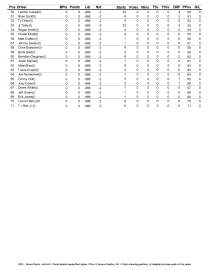