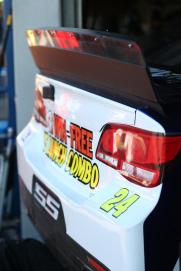 Carl Edwards, who finished sixth, spoke at length about how the package worked.

“I learned a bunch,” Edwards said. “I think it’s pretty clear that the more aerodynamic devices that you put on these cars, the bigger hole they put in the air and the worse it is to drive them and be able to pass. As long as NASCAR just keeps going the other way, just as long as they go to real low downforce.

“Not just a lower downforce, but if this is worse and Kentucky is better then let’s just keep going that direction. I really hope we do. NASCAR says they’re working on it and they want the best product for the fans and this was something that they tried. It could have worked, but I think it was obvious today that it was pretty tough to pass.”

Team Penske teammates Joey Logano (finished seventh) and Brad Keselowski (ninth) echoed each other’s comments on the difficulty of passing in the race.

Added Keselowski, “It doesn’t matter what my thoughts and observations are, it is what NASCAR wants. Whatever they want to do. It wasn’t fun. It wasn’t the worst I have ever seen, but this package increasingly rewards the car over the driver and I am not a fan of that.”

Race runner-up Kevin Harvick essentially answered with a non-answer when asked about the package in the post-race media conference: “I’m really proud of my team and the things that they did to prepare for the race, and we had a good, strong day.”

Sam Hornish Jr., who finished 19th, saw the race unfold in a different way with the new package than perhaps others.

“Back in the pack, it probably allowed me to complete some passes that I wouldn’t have normally,” Hornish said. “But it also kept me from completing some that I definitely had all the run in the world to get it done.

“It is a 50-50 deal as far as how it affects the car. The restarts were nuts and I was just really surprised there weren’t more yellows with the amount of cars that were sliding all over the place.”