The NASCAR Xfinity Series will race at Mid-Ohio Sports Car Course for the third time with Saturday’s Nationwide Children’s Hospital 200.

START: Nationwide Children’s Hospital Patient Champions will give the command for drivers to start their engines at 3:33 p.m. ET. The green flag is scheduled for 3:44 p.m.

NATIONAL ANTHEM: It will be performed by the Columbus Children’s Choir at 3:26 p.m.

FORECAST: The wunderground.com site predicts 82 degrees at race time with a 47% chance of rain. 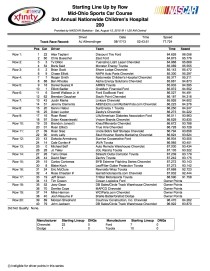