Daniel Hemric paced the field in the first of two Camping World Truck Series practice sessions at Michigan International Speedway with a lap of 185.009 mph.

Spencer Gallagher went to a backup after slapping the wall with his truck. 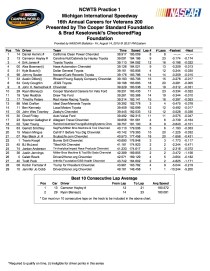