Team Penske claimed the top spots in the first Xfinity Series practice for the Zippo 200 at Watkins Glen International.

Ben Rhodes, driving the No. 88 for JR Motorsports, recorded the most laps in the session with 29 and was 12th fastest.

The practice session was stopped early on due to a hard crash by Daniel Suarez. The Joe Gibbs Racing rookie was OK and will go to a back-up car. Suarez finished practice with the 14th fastest speed. 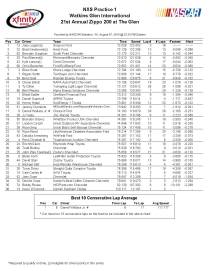