His fans should be happy about this: Jeff Gordon’s chances of making the Chase for the Sprint Cup have improved to 99 percent.

So says an updated weekly analytical report from CNBC’s Eric Chemi, who writes in a new post on Thursday that despite not having won a race yet in 2015, Gordon’s chances to make the Chase have improved from 94 to 99 percent.

“(Gordon’s) third place finish at Pocono has him *almost* guaranteed to make it in, but there is still that ever-so-slight chance he won’t,” Chemi wrote. “Gordon is in his final season, and not making the Chase will be a massive disappointment, on top of the currently disappointing fact he hasn’t even won a race yet.” 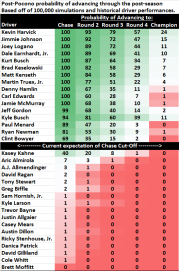 As for other drivers moving up or down the potential Chase grid, Kyle Busch lost just one percentage point due to running out of fuel on the last lap at Pocono. Busch, according to the CNBC report, is still on target to likely make the Chase, even though he slipped slightly from 95 to 94 percent.

“It’s a small difference, and he’ll still almost certainly get in, but it would have been much closer to 100 if he had been able to finish that last lap,” Chemi wrote.

The biggest loser at Pocono was Kasey Kahne, who wrecked on Lap 3 when his car spun off the track’s famed Tunnel Turn, shot across the infield and slammed into the pit road wall. The impact forced NASCAR to red-flag the race and required track officials to weld parts of the broken pit road wall back together.

Because of the wreck, Kahne’s last-place finish prompted his Chase hopes to plummet, to where he’s now in a rally mode if he hopes to get back into contention.

Wrote Chemi, (Kahne has) only a 40 percent chance of getting back into the Chase hunt. That’s nearly half the level he sat at last week, a much more comfortable 77 percent.

Kahne’s misfortune was good fortune for Clint Bowyer, who is now up to a 69 percent chance of making the Chase (after being at only 43 percent prior to Pocono). However, don’t forget that Bowyer appeared to be a lock to make the Chase last season, only to be eliminated in the final qualifying race at Richmond.

Lastly, defending Sprint Cup champion Kevin Harvick continues to be well on his way to repeating for a second consecutive title. Harvick leads all drivers with a 24 percent chance to win the Chase again.

If you want to contrast this week’s updated numbers to prior to Pocono, here are last week’s numbers.