Less than two weeks after Daniel Hemric proposed to Kenzie Ruston, they will compete against each other on the track.

Hemric, who regularly runs in the Camping World Truck Series, will drive in Friday’s K&N Pro Series East race at Watkins Glen International. Ruston, a regular in the series, also is entered.

They’ve raced against each other before – about 20 times in Super Late Models and two previous times this season in the K&N Series – but that’s nothing compared to what Hemric experienced on the trip to St. Lucia to propose to Ruston, his girlfriend of six years.

Hemric packed the engagement ring in his suitcase. As they waited on luggage after landing, her bag arrived and his didn’t. More bags came. His was not among those.

Finally, it arrived. The last bag.

Then came the proposal July 25 on the beach.

“I started getting down on one knee and I’ve never had a more nerve-racking experience in my life,’’ he said.

“Her reaction was priceless and it meant the world to me how excited she was and how shocked she still was whether she knew (about the proposal) or not.’’

Ruston admits she had a clue. She knew Hemric had gotten a stone from the ring of Ruston’s grandmother to put in Ruston’s ring. 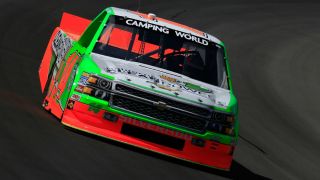 “I knew it was coming, and I still cried,’’ Ruston said. “It was very sweet and very personal.’’

As they return to racing, neither sees competing against each other as a big deal. After all, they met while racing Legends Cars in different divisions.

“In more ways than others, we actually help each other,’’ Ruston said. “We both understand racing. We do spend a lot of time apart, but I feel like racing is what brought us together. Racing is a big part of our lives.’’

Said Hemric: “I can’t imagine finding anyone better. I know she’s the one for me and I’m excited to spend the rest of my life with.’’