NASCAR is making plans to extend the wall that separates the track from the pits to limit vehicles from crashing on to pit road as happened three times this past weekend at Pocono Raceway.

Steve O’Donnell, NASCAR executive vice president and chief racing development officer, said Monday on SiriusXM NASCAR Radio’s “The Morning Drive” that plans are being put in place to make changes for when the series returns next year.

“Certainly, it’s something you never want to see,” O’Donnell said on SiriusXM NASCAR. “We’ll work with the track. We’ve already got a plan in place to look at extending that pit wall. Certainly got to make sure that by doing that you put the proper protection for the race cars and the drivers coming off of (Turn 3) as well. Some things for us to balance. We’ve got a plan in place to address that.” 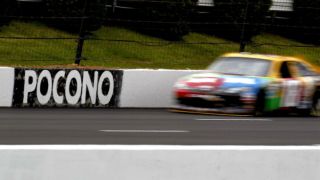 Sunday, Kasey Kahne had a similar accident and hit the inside pit wall, forcing members of Travis Kvapil’s team and AJ Allmendinger’s team, along with guests and others in the area, to scramble away from the wall. NASCAR confirmed there were no injuries.

“We’ve got to look at the data coming out of each one of those cars, what the impacts were, what the angle of impacts, the speeds, what was the wall there and then make sure that when we put a solution in place that that’s actually going to improve it,” he said.

“I know that sounds a bit flippant, but it’s easy to say just extend the wall, but if you do that and you do it at the wrong angle, you could cause more problems with cars coming off at a heavy rate of speed off Turn 3 at Pocono. That’s what we’re looking at now, how you extend that wall with the proper angle that keeps cars off pit road, which we always want to see but make sure that we’re able to protect the guys as they come out of (Turn) 3 at Pocono also.”

Brandon Igdalsky, president and CEO of Pocono Raceway, issued a statement Monday about the incidents this weekend and future plans.

“Our commitment to driver safety is paramount,” Igdalsky said. “We have made multiple upgrades and updates to our facility, with more safety improvements rolling out before the 2016 NASCAR season. We work hand-in-hand with NASCAR throughout the year to execute and implement these changes. Once NASCAR collects the data, as it pertains to the unique incidents involving Jeb Burton and Kasey Kahne from this past weekend, we will communicate with one another and develop the safest solution.”