Matt Kenseth won Sunday at Pocono Raceway, scoring his second victory of the season as Joey Logano and Kyle Busch each ran out of fuel while leading in the last three laps.

Logano, who led a race-high 97 laps, finished 20th. Busch, who was aiming for his four consecutive Sprint Cup victory, was 21st. 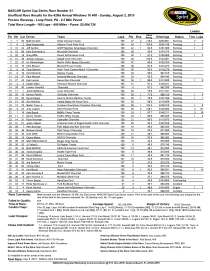