A Joe Gibbs Racing car will pace the field for the third consecutive Sprint Cup race. After Carl Edwards won the pole the past two races, Kyle Busch earned the top spot for Sunday’s event at Pocono Raceway.

Ryan Newman’s team reported Sunday morning on Twitter that the team found a potential issue with its rear end gear and changed it, moving Newman to the back of the field for the start. 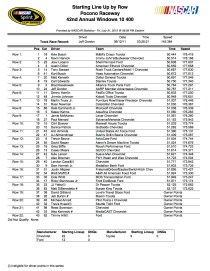