LONG POND, Pa. – As Joe Gibbs Racing has excelled the last few weeks, it has come at the expense of Hendrick Motorsports.

While Hendrick drivers have struggled, JGR’s Kyle Busch has won the last three races and four of the last five. Gibbs placed all four of its cars in the top five at Kentucky, and Carl Edwards won the pole the past two events heading into Friday’s qualifying at Pocono.

That doesn’t sit well with car owner Rick Hendrick and the rest of the organization. 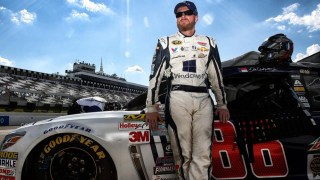 “From Rick on down, you get the impression that things need to be better and everybody needs to work harder,’’ Earnhardt said Friday at Pocono Raceway.

“I think you’ve got to be honest with yourself. The Gibbs guys have found more speed. They look over the last coupe of weeks to be a lot stronger and that we’re not on top of the mountain anymore by ourselves.

“We had a bit of an advantage last year, particularly on the engines, and it looks like a lot of things have changed. We can say it’s partly because of the rules, but you’ve got to give some of these manufactures credit. You’ve go to keep working and keep finding that advantage. That’s a never-ending pursuit to build the fastest racecar week in and week out. It looks like right now it’s a mad scramble to get ready for the Chase.’’

Earnhardt said the entire team met Tuesday. The agenda’s meeting focused on what happened at Indy.

“We lay everything on the table, anybody got a problem, anybody see where we can be better, do different, improve,’’ Earnhardt said of what happens in such meetings. “There’s a lot of communication. We just didn’t go home pissed off and then just show up at Pocono hoping everything was fine.’’

Friday had its struggles. Earnhardt was 14th in practice.

“Our car came off the trailer today with some issues and we were working to try to figure that out,’’ he said. “We worked on race trim for about two or three runs and really struggled trying to get the car where it needs to be. We’ve been real competitive since they repaved this track. I don’t think we’ve come here and not been quick, so I was a little frustrated with this morning and how we showed up.

“We think we learned what we were missing for race trim, but we needed to switch over to qualifying to get some opportunities to make some qualifying runs because time was running short. We felt like that what we did to the car for qualifying is going to help our race trim stuff and the balance of our car came back in our mock qualifying runs, so that made me feel better.

“I’m real, real anxious to get ourselves back into race trim for those practices (Saturday) so we can sort our stuff out and see where we really are.’’