It was Busch’s second win in the Xfinity Series at IMS in the last three years. It also sets up the opportunity for Busch to pull off a weekend sweep in Sunday’s Brickyard 400 Sprint Cup Series race at IMS.

If he is able to do so, it would be Busch’s first career Sprint Cup win at Indianapolis, his third win in a row this season and fourth win in his last five Cup races.

It appeared Blaney missed his mark coming out of Turn 2 and Busch was there to capitalize, passing him and holding on for the remaining half-lap. 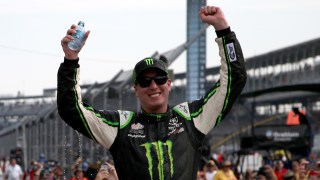 How Busch won: Blaney beat Busch into Turn 1 on the restart on Lap 75, eventually building as much as a 2.5-second lead. It appeared it was his race to win. But Busch kept picking away at Blaney’s margin and kept closing both the gap and increasing the pressure on the young driver. Blaney ultimately made a mistake coming out of Turn 2 on the final lap and Busch sailed by for the win.

Who else had a good day: Even though he failed to win, Blaney still had a good day with his runner-up showing. … In his first-ever visit to IMS, Daniel Suarez started second and finished third, meaning that two of the top three finishers were from the Joe Gibbs Racing stable. As for the third JGR driver, Erik Jones, read the next section.

Who had a bad day: Erik Jones, who started third, crashed on Lap 70 and finished 34th… David Starr and Blake Koch wrecked in Turn 1 on Lap 23. Koch got into the wall, incurring heavy damage to the rear of his car, while Starr piled into a tire barrier. … Landon Cassill had a strong car at the start, but fell back to finish eight laps off the pace in 31st place. … Chris Buescher had another difficult day. For his fourth consecutive race, he failed to finish in the top 10, placing 16th. Even so, Buescher remains atop the Xfinity points lead, although his margin over second-ranked Chase Elliott dropped from a 31-point advantage to 25.

Notable: Several drivers were close to being overcome by the heat during the race. Elliott Sadler went to the infield care center for treatment, while others including Ty Dillon and race winner Kyle Busch both spoke about how hot the conditions were and how exhausted they were at race’s end.

Quote of the day: “It’s my fault. I screwed up. This team doesn’t deserve that. I dropped the ball for them today. I take full responsibility,” – Ryan Blaney, who lost the lead on the final lap of Saturday’s Lilly Diabetes 250 at Indianapolis Motor Speedway.