Winning the Brickyard 400 has long been on Carl Edwards’ bucket list.

He took a big step towards that goal Saturday, earning the pole for Sunday’s Brickyard 400 at Indianapolis Motor Speedway.

When asked if he thought he’d ever win the pole, Edwards told NBCSN, “No. This is really a big deal. It’s a huge, huge thing to start from. It’s an awesome day for us.”

It’s Edwards’ first pole in the Brickyard and the third in one of NASCAR’s marquee events for Joe Gibbs Racing. It’s also Edwards’ second pole of 2015 and the 11th of his Sprint Cup career.

Stewart, who has struggled all season, was fastest in the first of the two qualifying rounds.

“The way he ran that first round, I know he was giving it everything he could,” Edwards said of Stewart, who is the only driver in Sunday’s starting five to have ever won the Brickyard 400, having done so twice.

Ryan Newman’s qualifying time was thrown out because he could not get the safety net of his car to stay up during his try. As a result, Newman will start at the rear of the field for Sunday’s race.

Here’s how Sprint Cup qualifying at Indianapolis played out: 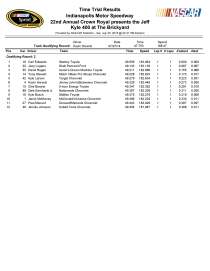 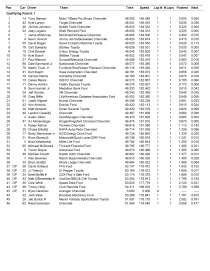