Denny Hamlin was the fastest in Friday morning’s NASCAR Sprint Cup practice at Indianapolis Motor Speedway with a lap of 182.208 mph. He was followed by Jimmie Johnson (181.796 mph) and Kevin Harvick (181.756 mph).

The only incident in practice came when Johnson’s car lost power and stopped at the entrance of pit road. Johnson said on the team’s radio to crew chief Chad Knaus that he thought it was either a fuel pump or electrical issue.

This is the first of three practices Friday for Cup teams. They’ve been given extra practice time to adjust to the new high-drag aero package being used this weekend.

The high-drag rules package features: 9-inch spoiler with 1-inch wicker bill (also known as the “Gurney Flap” after legendary driver Dan Gurney, who invented it) along with 43-inch radiator pan (splitter extension panel). 40-50 lbs of equipment were added to the cars to gather data on the cars’ performance. 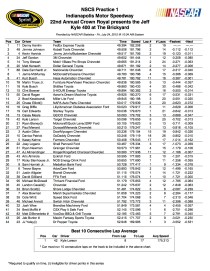