It was much more than beginner’s luck for Bobby Pierce, who earned his first Camping World Truck Series pole position — and in his first career start — Wednesday at Eldora (Ohio) Speedway.

Pierce, 18, from Oakwood, Il., is a veteran dirt racer but hadn’t driven in the Camping World Truck Series before Wednesday.

Not a problem, as he looked like a seasoned veteran when he shot to the top of the 34-driver field, taking the pole with a speed of 86.889 mph (at 20.716 seconds). He is the fifth driver in series history to win the pole in his truck debut.

Even though Pierce turned the fastest lap, he won’t necessarily start first in the race. The qualifying session set the starting order for five heat races that will set the starting lineup for Wednesday’s main event.

Several drivers wound up in the wall with damaged trucks, including Ty Dillon, Cole Custer and Ben Kennedy. It didn’t appear any driver would have to go to a backup truck for the heat races, which will begin at 7 p.m. ET .

Here’s how truck qualifying played out: 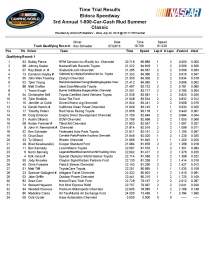