Rico Abreu is like any young race car driver.

When asked what’s on his bucket list not related to racing, the 23-year-old’s first answer – like the three NASCAR Next drivers before him – was skydiving.

Rico Abreu is not like any other young race car drivers.

The St. Helena, Calif.-native is 4-foot-4, a result of living with achondroplasia, a bone-growth disorder not shared by anyone else in his family.

That doesn’t impede Abreu, who won the 2015 Chili Bowl. He is scheduled to race in about 120 races in seven different classes in 2015.

When Abreu spoke with NASCAR Talk, he was more than week removed from winning his first stock car race, in the K&N East Pro Series at Columbus (Ohio) Motor Speedway.

This Q&A has been edited and condensed

NASCAR Talk: What’s the most races you’ve ever been in in one week?

Rico Abreu: I ran five in a row, five nights in a row. That was earlier in June in the USAC-Indiana Midget week. It’s five nights throughout Indianapolis race tracks. 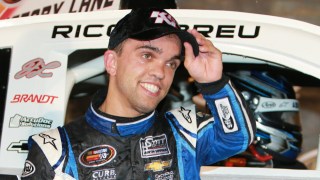 NT: How tiring was that?

Abreu: It wasn’t too bad because in open-wheel racing, they start around 4:30 p.m. and then they end up finishing around 10:30 to 11 p.m. You kind of have that morning and early afternoon to relax and not be too hard on yourself where K&N or NASCAR races is a little bit different where you have to be up at 8 o’clock for a driver’s meeting at nine and practice at 10:30, qualifying at 1 o’clock then you race anywhere from 4 p.m. to 8 p.m.

NT: What were you doing when you got the call about being part of the current NASCAR Next class?

Abreu: I believe I was at a sprint car race, and (I got) a text and it asked if we’d be willing to find the time and I was really happy to be apart of the NASCAR Next group. I wanted them to understand my schedule and how busy I am with my racing … I have 120 races this year on my schedule, so it’s really hard to get away and do something with them. Everyone worked really good with everyone at NASCAR Next and they worked out my schedule so it all works out where I can be at a majority of the events, but there’s only a few I can’t get to.

NT: What’s the worst accident you’ve ever been in?

Abreu: I crashed at Sun Prairie, Wisconsin (Angell Park Speedway) and wound up with a broken collarbone. That was probably the hardest crash I’ve ever had. A guy moved up on me and kind of pinched me into the wall and our cars are open-wheeled, the sprint cars, so it’s really easy to flip and be in a really vicious, violent crash. The walls are really short there, so I easily went over the wall and kept going outside of the track about 100 feet.

NT: What do you remember seeing?

Abreu: At that point you’re hanging on, and once I was done crashing, I went to get out and right when I got out my collarbone instantly started being in pain, so I knew something was wrong. I had the guy that works on our car drive me to the hospital and got some X-rays and they told me it was broken. So I headed back to Indianapolis. It was about six-hour drive, drove all the way back to Indianapolis. Went to OrthoIndy to a Dr. Kevin Scheid, he takes care of a lot of IndyCar drivers. It was a pretty crazy week, because I went in there Monday morning at 9 a.m. and he said to come back at 1 o’clock and I was in surgery by 1:15 and he fixed my collar bone; plated it, screwed it and then I was actually home by 2:45. It was about an hour and a half and I was already fixed up. I took about 15 days off, I went back for a check-up and he said I was good to go. and I started racing again.

NT: What do you consider your theme song?

NT: I know you got your start racing motorcycles, but what’s your earliest clear memory related to racing?

Abreu: Probably about 1998 or ’99 I went to a World of Outlaw sprint car race at Calistoga Speedway, about 10 minutes from my house. Jac Haudenschild won the race and he was running the top lane by the wall and everyone was on the bottom, so it was really exciting to watch and that’s where I fell in love with the sport of open-wheel racing.

NT: What do you remember about the first time you got on a motorcycle?

Abreu: I remember getting a motorcycle for Christmas. I don’t know how old I was. We have a lot of vineyards in our backyard, obviously, I’m from wine country, so we live on a vineyard. I remember being able to ride it through the vineyard rows and then out back behind a pond at our house. I remember I took it out through the mud and got it all muddy the first day I got it. My dad wasn’t too happy about that.

NT: Do you consider that the best Christmas gift you ever got?

NT: Since your dad (David Abreu) runs a vineyard, do you consider yourself a wine person?

Abreu: Yeah, I’m into it quite a bit. I enjoy being able to be around him and everyone at our ranch. We have a couple of different ranches and he has about 20 ranches that he takes care of, so any chance I’m home, I’m definitely outside with them. I really enjoy getting to go to dinner with my dad, just understanding it more and more, the wine side of it and all the different kinds of wines.

Abreu: I like some white wine. My dad doesn’t make any white wine, but a couple of his clients do that are really good. There’s a case of Sauvignon blanc that I really enjoy trying at dinner with him. He’s always into trying new wines or drinking really vintage Cabernet from the early 1900s, which is different for me because it’s got a different taste being an older wine with all this sediment in the wine. That’s something he enjoys doing, drinking an older bottle of wine at dinner with the family.

NT: What’s it like to grow up in wine country?

Abreu: It’s a beautiful area. I grew up on a ranch, so I always had a lot of stuff to do. We had a lot of livestock on our ranch. I raised market hogs for 4-H and FFA (Future Farmers of America) for 10 years. I spent a lot of time doing that. We didn’t just raise them for one show a year, we raised them year around for like 10 shows.