It was a Toyota tornado during Friday’s qualifying at New Hampshire Motor Speedway for Sunday’s 5-Hour Energy 301 Sprint Cup race.

Four of the top five and five of the top eight qualifying speeds came from Toyota drivers, led by Carl Edwards’ lap at 135.164 mph, which marked his first pole of the season (and since 2013) and his first career pole at the 1.058-mile flat track in New England.

“I’ve struggled at this racetrack personally, so this is big for me,” Edwards told NBCSN afterward. “These Toyotas are fast. This is pretty cool.

“My expectation is to do the best we can. My hope is we can win this thing. We need to get another win.”

The only non-Toyota driver in the top five was second-fastest Joey Logano in his Ford (135.021 mph). Chevrolet drivers Kurt Busch (134.596) and Jimmie Johnson (134.501) were sixth- and seventh-fastest, respectively.

“Overall, it’s good,” Logano said. “Second (place) isn’t fun a lot of times, but it’s better than third, so we hope we’ll keep this speed and move on to race day.” 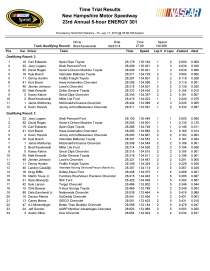 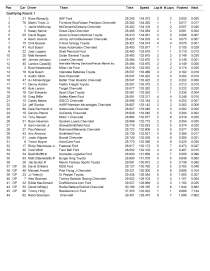