Ask Tony Stewart a question, and he begins roughly half his answers with some variation of “I’ll be honest.”

It’s more than just a verbal tic. It’s also an acknowledgement that he always wears his heart on his sleeve.

Stewart did just that when pressed about the worst slump of his career for 27 minutes Tuesday morning on the semi-weekly NASCAR media teleconference.

He seemed downtrodden at best discussing the results of his No. 14 Chevrolet, which has one top 10 in 18 starts and is ranked an eye-popping 28th in the standings.

“It’s been a disappointing year,” Stewart said. “We’re desperately trying to figure out what it’s going to take to move the needle.”

The mediocre results have meant precious few media opportunities this year for Stewart, whose 48 wins and 298 top 10s in 572 starts have made him a frequent face on media center dais around the circuit. Before Tuesday, the last time he spent significant time facing a plethora of reporters was in the preseason, and his mood was far different.

After a turbulent 18 months that included missing 15 races in 2013 with a broken right leg from a sprint car crash and skipping three races last year while grieving after his sprint car struck and killed Kevin Ward Jr., Stewart was embracing his buoyant and impish side heading into the 2015 season.

An encouraging and refreshing offseason had cleared the mental and physical cobwebs, and Stewart strutted through the preseason Media Tour in late January and Speedweeks in February with the vigor of anticipating a return to championship form.

Tuesday’s sullen tone was markedly different, and Charlotte Observer reporter Jim Utter asked Stewart if the wind had been knocked from his sails by the struggles early this season.

“Yeah, it did,” Stewart said. “I wish I could say, ‘No, it didn’t.’  But it did.  I mean, the whole year’s been frustrating. It just seems like everywhere we go, we seem to fight the same balance. That’s the part that’s been frustrating for the whole 14 car. 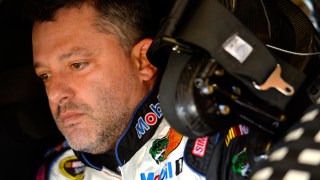 “We’re trying a ton of things and just can’t seem to find anything that moves the needle and seems to make significant change. Just seems like the further we go into the year, the more frustrating that gets, too.”

The weariness was plainly obvious Tuesday.

His answers were mostly clipped and rote as he eschewed the big-picture eloquence he can provide with unique authority. “Smoke” always will be known as the guy who slapped away a tape recorder and kicked at a photographer, but he is a bright and thoughtful soul who is the best interview in NASCAR when he wants to play ball.

In the same media teleconference a year ago, Stewart waxed poetic for nearly an hour about the plight of youth seeking rides in racing, the sanctity of the Brickyard and the safety initiatives he had spurred in sprint cars.

That expansive rumination was missing Tuesday — a telling indicator of where things stand for a superstar who stunningly has seemed lost on the track much of the year despite a reputation as the most versatile driver of his generation.

During a brilliant and beguiling career filled with amazement, statesmanship and petulance, Stewart has been called many things, but one label never has applied: insincere

He has a wicked sardonic streak — his deadpan interview lauding wrecks at Talladega Superspeedway three years ago was comedic performance art that rivaled Andy Kaufman — but he always expresses how he feels, even when he isn’t painfully blunt. Sometimes, his tone and choice of words speak volumes instead.

And that brings us to what might have been the most important question he faced Tuesday.

Jeff Gluck of USA TODAY Sports asked whether, given Jeff Gordon’s impending retirement at 44 and Mark Martin’s decision to race into his mid-50s, Stewart had considered how much longer he would race.

The subtext was clear: Does being mired in your third consecutive nightmarish season have you pondering the end of your career?

“Right now, I’m just trying to figure out how to get my car working better,” Stewart said, “to be honest.”