START: George Sherman, president of Advance Auto Parts, will give the command for drivers to start their engines at 7:37 p.m. ET. The green flag is scheduled for 7:45 p.m.

NATIONAL ANTHEM: It will be performed by the 113th Army Band from Fort Knox at 7:31 p.m.

FORECAST: The wunderground.com site predicts 80 degrees at race time with a 20% chance of rain. 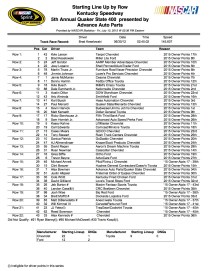