START: Three master distillers – Jimmy Russell of Wild Turkey, Jim Rutledge of Four Roses and Fred Noe of Jim Beam –will give the command for drivers to start their engines at 7:37 p.m. ET. The green flag is scheduled for 7:45 p.m.

PRERACE SCHEDULE: The Xfinity garage opens at 9 a.m., and qualifying will be held at 3:45 p.m. The drivers meeting is at 6:45 p.m. Driver introductions is at 7 p.m.

NATIONAL ANTHEM: It will be performed by Felita LaRock, former lead vocalist for the USAF Band of Flight at 7:31 p.m.

FORECAST: The wunderground.com site predicts 74 degrees at race time with a 37% chance of rain.

LAST TIME: Kevin Harvick won this race a year ago, taking the lead from Kyle Busch on a restart with five laps remaining. In the most recent Xfinity race at Kentucky last September, Brendan Gaughan led the final six laps after seizing first from Chase Elliott. 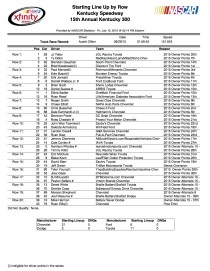