NASCAR Sprint Cup teams got less than an hour of what was to have been more than three hours of practice Friday at Kentucky Speedway before rain arrived.

If qualifying is canceled later in the day, the field will be set based on practice speeds.

The only incident in practice came off the track. Danica Patrick went to turn into an opening along pit wall to return to the garage when Sam Hornish Jr. was heading out to pit road through that same area. Patrick and Hornish stopped. Cole Whitt ran into the back of Hornish’s car causing minor damage. 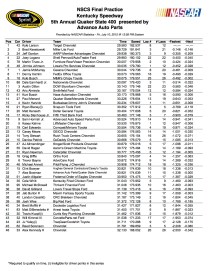