The scheduled 150-lap race was shortened by five laps to just 145 laps after Ben Kennedy’s truck was turned into the SAFER barrier and then into the catch fence, tearing up several feet of fencing, as well as bending two fence support posts.

Here’s the final results from the race: 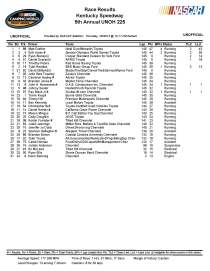