Dale Earnhardt Jr. dominated Sunday’s Coke Zero 400 at Daytona International Speedway, leading 96 of the 161 laps for his second victory of the season, his fourth at DIS and his 10th career restrictor plate win.

Jeff Gordon finished sixth in the final appearance of his Sprint Cup career at Daytona. 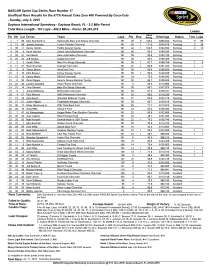