DAYTONA BEACH, Fla.  — The NASCAR Sprint Cup Series will play host Sunday at Daytona International Speedway to the third of four restrictor-plate races this season with the Coke Zero 400 — the first in NBC Sports’ 20-race broadcast schedule this season.

START: Actor-writer-producer David Spade will give the command for drivers to start their engines at 7:55 p.m. ET. The green flag is scheduled for 8:08 p.m.

DISTANCE: The race is scheduled for 160 laps (400 miles) around the 2.5-mile superspeedway.

PRERACE SCHEDULE: The Sprint Cup garage opens at 2 p.m., and the drivers meeting is at 5:45 p.m. Driver introductions begin at 7:15 p.m.

NATIONAL ANTHEM: It will be performed by the U.S. Navy Band of the Southeast at 7:46 p.m.

FORECAST: The wunderground.com site predicts 81 degrees at race time with a 41% chance of rain.

LAST TIME: In a race postponed to Sunday afternoon by rain, Aric Almirola took the lead from Kurt Busch seven laps before the skies opened. Already official by virtue of being past halfway, the race was halted after 112 of a scheduled 160 laps, and Almirola was declared the winner. It was the first win for the famous No. 43 since 1999. 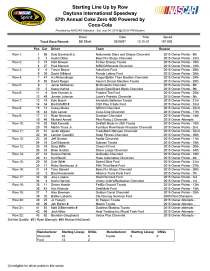