Daniel Suarez made history Saturday with a qualifying speed of 180.256 mph, claiming his first career pole for the Xfinity Series’ Subway Firecracker 250 at Daytona International Speedway.

Suarez is the first Mexico native to earn a pole in a Xfinity Series pole in the Unites States.

Suarez is now the second driver from Mexico to win an Xfinity  pole, joining Jorge Goeters, who did it in Mexico City in 2005.

“To be honest, I can’t describe with words what I’m feeling right now,” said Suarez. “First of all, I want to thank everyone at Joe Gibbs Racing. It’s unbelievable. I mean, my car is super-fast. We felt that speed in the first practice yesterday. We knew that we had a fast car in traffic in the draft, but we didn’t know exactly what to expect with a single-car run, and the car was as fast or even better.”

Suarez and his No. 18 Toyota will be joined on the front row by Brian Scott (179.827) in the No. 2. Suarez and Scott has the fastest cars in both rounds of qualifying.

Mark Thompson’s No. 13 car failed post-race inspection, meaning his qualifying time will be disallowed and that Derrike Cope (No. 70) will now start the Firecracker 250. 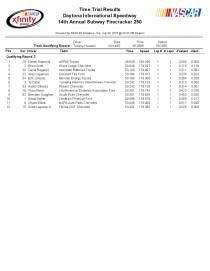 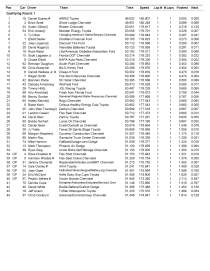