Ty Dillon and his No. 3 Richard Childress Chevrolet needed just one lap to be the fastest in the Xfinity Series’ final practice for the Subway Firecracker 250.

Dillon recorded a speed of 179.978 mph around Daytona International Speedway after being 28th fastest in the first session. 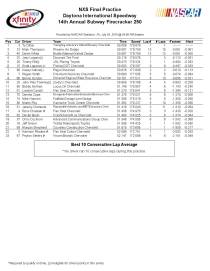