The Sprint Cup Series’ first practice for the Coke Zero 400 at Daytona International Speedway was led by Dale Earnhardt Jr., who put up a best speed of 202.284 mph during his 19 laps on the 2.5-mile track.

The practice was stopped nine minutes into the session by a nine-car accident including Kyle Busch, Brad Keselowski, Greg Biffle and Ryan Newman. The crash caused many teams to go to their back up cars. 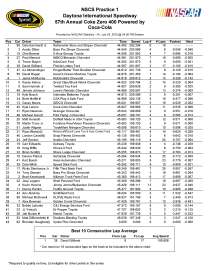