After returning to his original hometown of Vallejo, Calif., to reminisce about where his racing career began and see friends and family, Jeff Gordon’s adopted hometown is getting into the act, as well.

Town officials in Pittsboro, Ind., announced on Tuesday that they will toast Gordon and celebrate his racing career with “Jeff Gordon Day” and a parade in his honor July 9.

Pittsboro, a small town located just west of Indianapolis, was where Gordon’s family moved to when he was 14 so he could further pursue racing opportunities, particularly on short tracks throughout the Midwest. 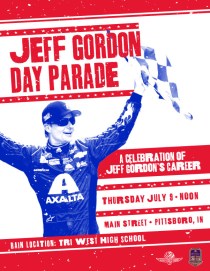 The parade, to be sponsored by Indianapolis Motor Speedway, will kick off at Noon ET and travel down Pittsboro’s Main Street.

It’s rather fitting that IMS is part of Gordon’s special day, as he’s earned a record five Brickyard 400 wins there, including last season.

Gordon hopes to earn victory No. 6 in his final go-round at the Brickyard on July 26.