In his fifth race after returning from injuries that sidelined him for nearly three months, Kyle Busch won Sunday’s Toyota / Save Mart 350 at Sonoma Raceway for his first win since March 2014.

Rounding out the top five were Kevin Harvick and Joey Logano. 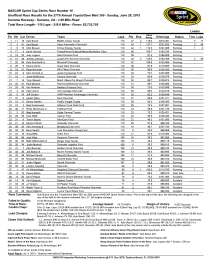