Jeff Gordon must have known something when on Friday he said he considered AJ Allmendinger to be the man to beat in Sunday’s Toyota/SaveMart 350 at Sonoma Raceway.

Allmendinger, who won last summer’s road course race at Watkins Glen International, will lead Sunday’s race on the opposite coast of the country, earning the pole during Saturday’s qualifying session.

It was Allmendinger’s first Sprint Cup pole since April 2012 (Kansas) and his first career pole on a road course.

Allmendinger is still looking for his first win of 2015, which would likely put him in the Chase for the Sprint Cup. He knows that Sunday could be his best chance to date to do just that, if not potentially for the season.

“It’s a good day, now we have to focus on tomorrow,” Allmendinger told Fox Sports 1.

Defending race winner Carl Edwards failed to make it out of the first of two rounds of qualifying.

Only one driver failed to make the 43-car field: Brendan Gaughan. 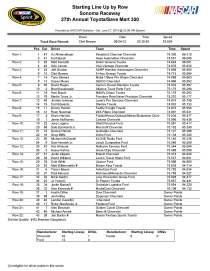