After starting from the pole, David Mayhew passed Dalton Sargeant in a green-white-checkered finish to win the K&N Pro Series West Series’ Carneros 200 at Sonoma Raceway.

It is Mayhew’s first win of 2015 and the ninth of his career.

Mayhew led only four laps — the first two and the last two — while Sargeant led 64.

“Those last few laps were tense for sure,” Mayhew said. “We’ve been second a few times, third. We’ve been right there knocking on the door. It’s great to finally come away with the win.”

Mayhew’s best finish this season was second in the opener at Kern County Raceway Park. 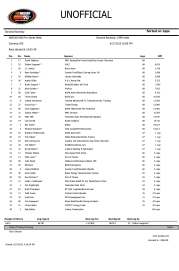