Clint Bowyer, AJ Allmendinger, Sam Hornish Jr. and Danica Patrick were fastest in the first of two Friday practice sessions for the Toyota/SaveMart 350 at Sonoma Raceway.

Bowyer’s performance is of note because his best finishing average at any Cup track is at Sonoma (9.2). Bowyer won there in 2012, while former Michael Waltrip Racing teammate Martin Truex Jr. won there in 2013.

Qualifying takes place Saturday – the only on-track action for the Sprint Cup drivers that day – at 2:15 pm ET. 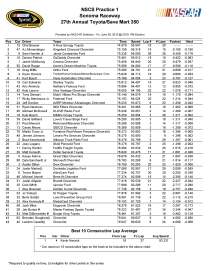