JOLIET, Ill. – In literally the speed of a blink of an eye, Austin Dillon overtook Ross Kenseth to earn the pole position for tonight’s Owens Corning AttiCat 300 at Chicagoland Speedway.

Dillon roared to the front of the field — for his fifth pole of the season and 15th of his career in the Xfinity Series — with a burst of 176.569 mph, a mere .012 of a second faster than Kenseth, who qualified second with a speed of 176.557 mph in his first career start on the Xfinity circuit.

During practice Friday, Kenseth went for a heck of a spin at the 1.5-mile track about 45 miles southwest of downtown Chicago . But to his credit, the son of NASCAR Sprint Cup driver Matt Kenseth kept the car off the wall and away from other drivers.

During Saturday’s qualifying, the younger Kenseth was the fastest after the second round, but was aced out by Dillon late in the third session.

Starting on the outside of the front row was still a noteworthy distinction for Kenseth, as that Saturday’s race – at least for now – is the only Xfinity race that Kenseth is slated to run thus far this season.

Ryan Blaney got into the wall during the second round and suffered moderate damage to the right side of his Ford Mustang. He immediately took his car to the garage for repairs, but about 10 minutes later elected to go to a backup car. 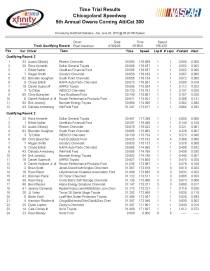 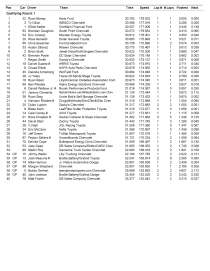