All four RCR drivers were in the top nine, including three in the top-five.

Herring was behind the wheel to set up the No. 54 Toyota Camry for Erik Jones, who will compete in Friday night’s Camping World Truck Series race at Iowa Speedway, and then head to Chicagoland Speedway for Saturday night’s Xfinity Series race.

Kenseth turned the fourth-most laps of any driver (38). But there was no lap more eventful than the 27th lap when Kenseth came off Turn 4 and went around.

To his credit, the younger Kenseth did not hit either the outside or inside retaining walls or, more importantly, didn’t tangle with another car. He flattened two of the four tires on his Toyota Camry in that spin, but still managed to make it to the garage relatively unscathed.

The second Xfinity Series practice today will go from 7 to 7:55 pm ET at CLS. 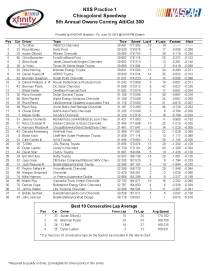