Looking to end a four-race slump of bad things happening to a great Truck, Erik Jones got off to a good start by recording the fastest speed in the only practice session for the Camping World Truck Series’ race at Iowa Speedway.

Jones, who won at Iowa last year as a part-time driver, was followed by Christopher Bell with a speed of 135.682 mph. Bell’s speed is noteworthy because the Norman, Okla., native is making his first-career start in the CWTS this weekend.

Rounding out the top-five was John Hunter Nemechek, Spencer Gallagher and Cameron Hayley. 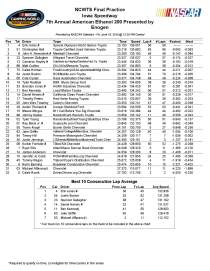