Despite finishing outside the top 10 for only the second time this season, Kevin Harvick remained the Sprint Cup points leader after Sunday’s Quicken Loans 400.

Harvick finished 29th after a flat tire late in the race, which was shortened by rain after 138 of 200 scheduled laps. The Stewart-Haas Racing driver led a race-high 63 laps.

Martin Truex Jr., who finished third and tied a NASCAR record with his 14th top 10 in the first 15 races, is second in the standings, 15 points behind Harvick. 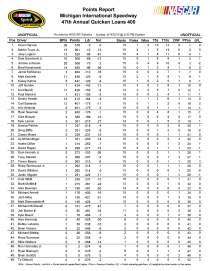