Busch was in the lead when rain triggered the race’s fourth red flag, ending the event after 138 of 200 scheduled laps at the 2-mile oval.

With two victories, Busch joins Jimmie Johnson (four) and Stewart-Haas Racing teammate Kevin Harvick (two) as multiple-race winners in NASCAR’s premier series. Busch, who missed the first three races while suspended after a Delaware family court determined it was more probable than not he had committed an act of domestic violence, was granted a waiver by NASCAR making him eligible for the Chase for the Sprint Cup.

Here are the results from Sunday’s Quicken Loans 400: 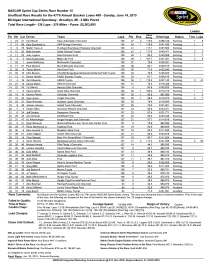