Custer, 17, won his second career CWTS race after Matt Crafton and Erik Jones, who led most laps of the 160-lap race, were taken out in consecutive accidents with less than 20 laps left.

Custer, who led twice for 19 laps, took the lead from Tyler Reddick on a restart with five laps to go and was unchallenged the rest of the way. His first win came last year at New Hampshire.

“(In the closing laps) I was just trying to tell myself ‘no excuses,’ ” Custer told Fox Sports 1. “I think we were a little bit better than (Reddick). We struggled a little bit all day. I’m just tired.”

The race, which was delayed two hours by rain, was only Custer’s third of the year, as he is not old enough to race on intermediate or larger tracks. It is also JR Motorsports’ second win of the year with the No. 00 truck, which also won at Charlotte Motor Speedway with Kasey Kahne.

“I always knew we had a truck capable of winning,” Custer said. “We just had to put everything together for a race.”

How Cole Custer won: Custer led twice in the race. He took the lead for good with five laps to go after Matt Crafton crashed into the wall on a restart from a caution caused by an Erik Jones spin.

Who had a good night: In his first race as a full-time CWTS driver, John Hunter Nemechek started 12th and made his way toward the front, entering the top five with about 100 laps left. The-18 year-old got loose and made contact with Crafton who slammed into the wall with eight laps left. With minimal damage, Nemechek finished fourth … Johnny Sauter was a constant presence in the top five, but battled issues on pit road. A bad pit stop during a caution with less than 50 laps to go sent Sauter back to 11th. He battled back to third thanks to two late cautions.

Who had a bad night: Erik Jones, again. The rookie led 84 laps and was in striking distance of the lead with 18 laps to go when his No. 4 truck got loose passing a lapped truck on the inside and spun in Turn 4. A lap later Jones stalled on the frontstretch due to a battery issue. It’s the second week in a row Jones has had a winning truck and battery problems … Justin Boston and Mason Mingus caused the first caution of the night on Lap 54 (which happens to be Boston’s number) when the two collided with each other and then the wall.

Notable: Matt Crafton and Erik Jones both recorded their first DNFs of the season … Spencer Gallagher (second) was the highest-finishing rookie in his first race at Gateway Motorsports Park. It is also Gallagher best-career finish in 19 races.

Quote of the night: “I think it’s one of those tracks that’s a driver’s track. You have to get to the point where you have to run this place as hard as you can om each and every lap.” – John Hunter Nemechek after recording his best career finish. 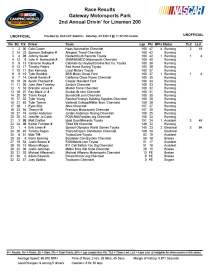