Kevin Harvick had the competition in a fog – or so it seemed.

Fog cut in half the first of two Sprint Cup practices Saturday at Michigan International Speedway, as drivers only had 30 total minutes of on-track time in the morning session.

A second and final practice session is slated for Noon to 12:55 pm.

Harvick paced the field with a top lap of 201.084 mph. According to Fox Sports 1, Harvick made just 12 laps, and had the fastest lap of the field in eight of those laps in Saturday’s practice session.

Harvick continued his incredible streak of being the fastest of the pack for the fifth straight session – all three last weekend at Pocono and the first two sessions (Friday and the first session Saturday) at MIS.

The only other driver over 200 mph in Saturday morning’s abbreviated practice was pole sitter Kasey Kahne (200.401 mph). 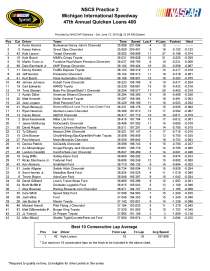