Kasey Kahne will lead the Sprint Cup Series to the green flag for the first time since 2012 Sunday in the Quicken Loans 400 at Michigan International Speedway.

Here’s how the rest of the 43-car field will follow Kahne. 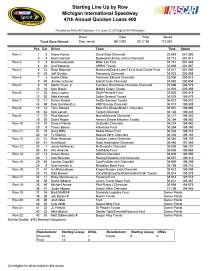 The 2023 NASCAR season will begin with Sunday’s Clash at the Coliseum, the second race on a purpose-built track inside Los Angeles Memorial Coliseum.

Although a non-points race, last year’s Clash generated intense interest as NASCAR moved the event from its long-time home at Daytona International Speedway to Los Angeles. The race was rated a success and opened doors for the possibility of future races in stadium environments.

Year Two will find drivers competing on a familiar landscape but still with a track freshly paved. Last year’s racing surface was removed after the Clash.

Logano put bookends on 2022 by winning the first Clash at the Coliseum and the season’s final race at Phoenix to win the Cup championship. He’ll be among the favorites Sunday.

Chastain was the breakout star of 2022, winning a pair of races and generally putting himself front and center across much of the year. Can he start 2023 on a big note? If so, he will have to do so without replicating his Hail Melon move at Martinsville after NASCAR outlawed the move Tuesday.

Sunday will begin the final roundup for Harvick, who has said this season will be his last as a full-time Cup driver. He is likely to come out of the gate with fire in his eyes.

Welcome to Kyle Busch’s Brave New World. After 15 seasons at Joe Gibbs Racing, he begins a new segment of his career with Richard Childress Racing. He led 64 laps at last year’s Clash but couldn’t catch Joey Logano at the end.

After a successful — and controversial — Xfinity season, Gibbs moves up to Cup full-time with his grandfather’s team. Will he be the brash young kid of 2022 or a steadier driver in Season One in Cup?

Interstate Batteries, which has been a Joe Gibbs Racing sponsor since the team’s first race, has expanded its involvement with the team for 2023.

Interstate, based in Dallas, will be a primary JGR sponsor for 13 races, up from six races, the number it typically sponsored each year since 2008.

Christopher Bell and Ty Gibbs will run the majority of Interstate’s sponsorship races, but Denny Hamlin and Martin Truex Jr. also will carry the sponsor colors.

“We’re extremely proud of our partnership with our founding sponsor, Interstate Batteries,” said team owner Joe Gibbs in a statement released by the team. “They have been such an important part of our team for over three decades now, and it’s exciting to have them on board all four of our cars this season. The best part of our partnership is the relationships we’ve built with everyone there over the years.”

Bell will carry Interstate sponsorship in Sunday’s Clash at the Coliseum, the All-Star Race May 21, the Coca-Cola 600 May 28, at Texas Motor Speedway Sept. 24 and at Martinsville Oct. 29.

Hamlin will ride with Interstate sponsorship March 26 at Circuit of the Americas, and Truex will be sponsored by Interstate July 23 at Pocono.

Interstate was a key JGR sponsor in the team’s first season in 1992.