So it’s no surprise the Charlotte stop on Swift’s 1989 tour Monday night brought a parade of NASCAR personalities to Time Warner Cable Arena.

Sprint Cup champions Jimmie Johnson (who admitted last year to harmonizing with Swift in his personal car) and Matt Kenseth brought their daughters to the concert.

One of the many benefits of having a house full of girls! @taylorswift13 pic.twitter.com/hgM0A63Rmr

Drivers Austin and Ty Dillon also attended as escorts for Childress Insitute for Pediatric Trauma patients Meredith Cross and Louisa Broughton. The girls had suffered traumatic injuries when younger but thanks to care advocated by the Childress Institute, they had recovered well enough to attend the concert.

Utilizing parent company Comcast’s partnerships with NASCAR and Swift, Xfinity provided VIP treatment for Cross and Broughton, including a limousine ride and meet and greet with Swift. Xfinity Series drivers Ryan Reed and Cale Conley also attended the show with the Dillon brothers, whose grandfather, Richard Childress, is their team owner and the founder of the Childress Institute for Pediatric Trauma. 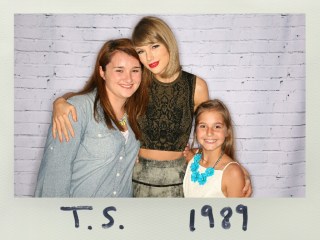