Although Kevin Harvick qualified fifth for today’s race at Pocono Raceway and would have had a chance to pick a pit stall with an opening either behind or in front of him, a penalty for being issued warnings two consecutive race weekends gave his team the last pick.

The result is that he’ll pit behind Dale Earnhardt Jr., who swept both Pocono races last year, and in front of AJ Allmendinger.

Here’s a look at where the rest of the field will pit in today’s race with their position noted by the car number listed in each box. 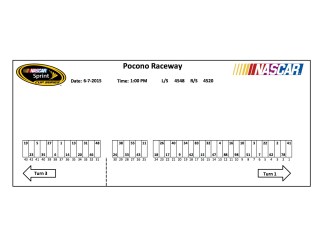