After missing the first three races of the 2015 season due to a NASCAR suspension, Kurt Busch has become one of the most prolific pole position earners in Sprint Cup, having captured the top spot three times in the last 11 races.

Busch will start Sunday’s Axalta “We Paint Winners” 400 at Pocono Raceway from the pole. He’s also started from the pole this season at Fontana and Texas.

Carl Edwards will start alongside the elder Busch brother on the front row, Edwards’ first front row start of the season. 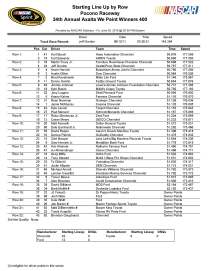