Kurt Busch earned his third pole of the season – in just 11 attempts – Friday at Pocono Raceway.

It was the 19th career pole for Busch, who also took the top spot this season at Fontana and Texas.

“What a day today,” Busch told Fox Sports 1. “I feel like there were six corners out there. … We reverted to the setup when we sat on the outside pole here last year.

“We’ll take it. We worked real hard for it. I’m surprised and happy at the teamwork.”

It’s the first front row start for Edwards this season.

However, five drivers failed to lay down a qualifying time in the third and final round. They’ll start eighth through 12th, based upon their times in the second round of qualifying.

The reason the five couldn’t register a lap was due to Denny Hamlin spinning out, making it impossible for the other drivers to also make a lap in the allotted time: Jimmie Johnson, Kyle Busch, Joey Logano and Kasey Kahne.

“I’m sure there’ll be some talking to NASCAR from the guys who didn’t run a lap,” Truex said. “I know if I were one of those guys, I’d be mad.” 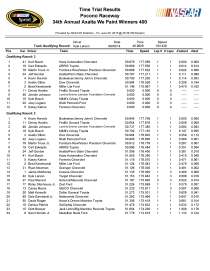 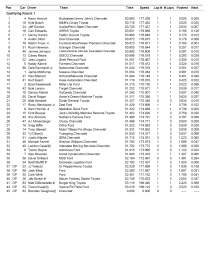