FORT WORTH – Matt Crafton withstood not one, but two challenges from Daniel Suarez, with the last coming on a restart with two laps to go and went on to win Friday night’s WinStar World Casino 400 NASCAR Camping World Series race at Texas Motor Speedway.

It’s the third win of the season for Crafton, the points leader and two-time reigning series champion. This also marked Crafton’s second win in the last three Texas races and his eighth-career win.

Crafton led seven times for 77 laps, including 33 of final 36. Those other three were led by Suarez, who had the inside line on the final two restarts.

Suarez settled for second place for the second straight week, a career best.

Pole-sitter Erik Jones was strong early before having battery issues and had to make multiple battery changes. Jones finished the race 15, two-laps down.

“One of the goals we set out with was to lead more laps and get more wins than the previous two (seasons),” said Crafton’s crew chief, Carl Joiner. “We’re just building good trucks right now. Matt’s on his game and we’re all gelling really good.”

How Crafton won: Crafton took the lead from Erik Jones on Lap 85 after Jones pitted for battery problems and never returned to the leap lap. Crafton would lead 82 of the 167 laps, only being challenged on restarts.

Who had a good night: Daniel Suarez started third and after Jones’ exit, remained a fixture in second. Suarez has finished in the top five three times in 2015, and finished in the top 10 in all seven CWTS races he’s entered … John Wes Townley took advantage of two late cautions to finish third … Joe Nemechek, in an unsponsored ride, finished sixth.

Who had a bad night: Erik Jones was forced to pit a second time during a caution halfway through the race to replace a battery. This came after Jones had led twice for 68 laps to start the race. Jones is now third in points, 32 behind Crafton  … Tyler Reddick was running in the top five most of the night before being penalized for driving through more than three pit stalls. He was penalized later for speeding while exiting pit road and later stalled on pit road. He finished 11th, one lap down  … Timothy Peters went up in smoke with 20 laps remaining, bringing out a caution and ending his day 21st.

Quote of the night: “The kid has put his stuff together, he has run really, really good … I took him to lunch yesterday, I guess I’ll have to take him to lunch more often.” – Matt Crafton on the performance of Daniel Suarez. 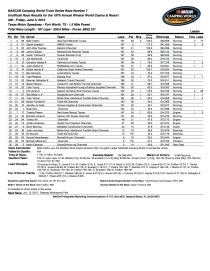