One mishap of note occurred. Just after the midpoint of the 85-minute session, Tony Stewart lost control past Turn 2 and slid into a tire wall.

Stewart told Fox Sports 1, “I was already past the bump (from the tunnel turn), got loose on the exit of it and I couldn’t catch it. So, driver error.”

The damage was severe enough to prompt the team to immediately go to a back-up car for the remainder of the weekend.

But that could bode well for Stewart, if past history is any indication. In 2009, he started from the rear of the field in a back-up car and roared forward to earn the victory, the first win in Stewart-Haas Racing history.

Early in the session, Sam Hornish Jr. also took a solo-car spin, but did not suffer any damage to his Richard Petty Motorsports Ford. 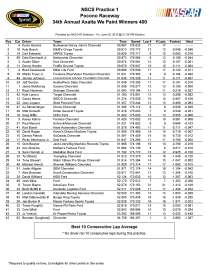